Politics. Whether we like it or not, it’s everywhere (lately, especially). It seems no country has its act together, so audiences, in some awkward way, somehow need political films that can surpass the storylines of real life. Perhaps ironically, many on this list are ripped straight from the headlines. Hindsight is 20-20, it seems.

Currently streaming on Netflix, the following films are not strictly political. They understandably feature the law, media, war, history, diplomacy, and regular people whose lives are affected by the everyday decisions elected officials make. Love ’em or hate’ em, nothing puts a positive spin on political nonsense like Hollywood, so while it may not be fun to live through these times, films about them can provide a sort of odd catharsis.

Chris Terrio (Justice League) won the Best Adapted Screenplay Oscar, while Ben Affleck won an Oscar for Best Picture of the Year, so you know this film is dope. In a nutshell, Argo is about the 1979 hostage-taking of Americans at the US Embassy in Iran and their brilliant plan of escape by posing as a film crew, scouting locations for their new movie.

Despite its striking historical inaccuracies, it’s a fantastic film, full stop. It’s the kind of movie that film students (if they haven’t already) will be scrutinizing and emulating for a generation. The pacing is perfection; the characters are fully developed; The setting is well-defined, the stakes are high, and there is a massive deadline (and an even more massive payoff). The clock is ticking.

Dame Helen Mirren can seriously do no wrong. That’s why she’s a Dame, and in The Queen, her portrayal allows for a full suspension of disbelief. Directed by Stephen Frears, the film takes place in 1997, right after the death of Princess Dianaand centers around a tumultuous time in England’s royal history when politics and media collide to disastrous results.

It is a beautiful, poignant, and superbly acted film that denies the temptation of scandal; instead, it focuses its intention on the inner, political, and familial turmoil of keeping up appearances while dealing with the highly-publicized mourning of a woman who was known as a rogue, yet lovely, troublemaker within the regal royal family.

Based on the novel by Robert Harris, Munich: The Edge of War stars Jeremy Irons as Neville Chamberlain, remembered by some as the man who botched the Munich Agreement, effectively paving the way for Hitler to invade Czechoslovakia while (falsely) ensuring England that everything was fine.

While that part is true, the bulk of the narrative, though clever and amazing, is unfortunately fictional. Hugh Legat (George MacKay) is a German diplomat who, after years of estrangement, is compelled to conspire with his old uni mate, Paul von Hartman (Jannis Niewöner). The crux? Paul happens to be part of the “secret opposition to Hitler.” Oh, and did we mention he also works for the Führer himself? You can watch the trailer here. 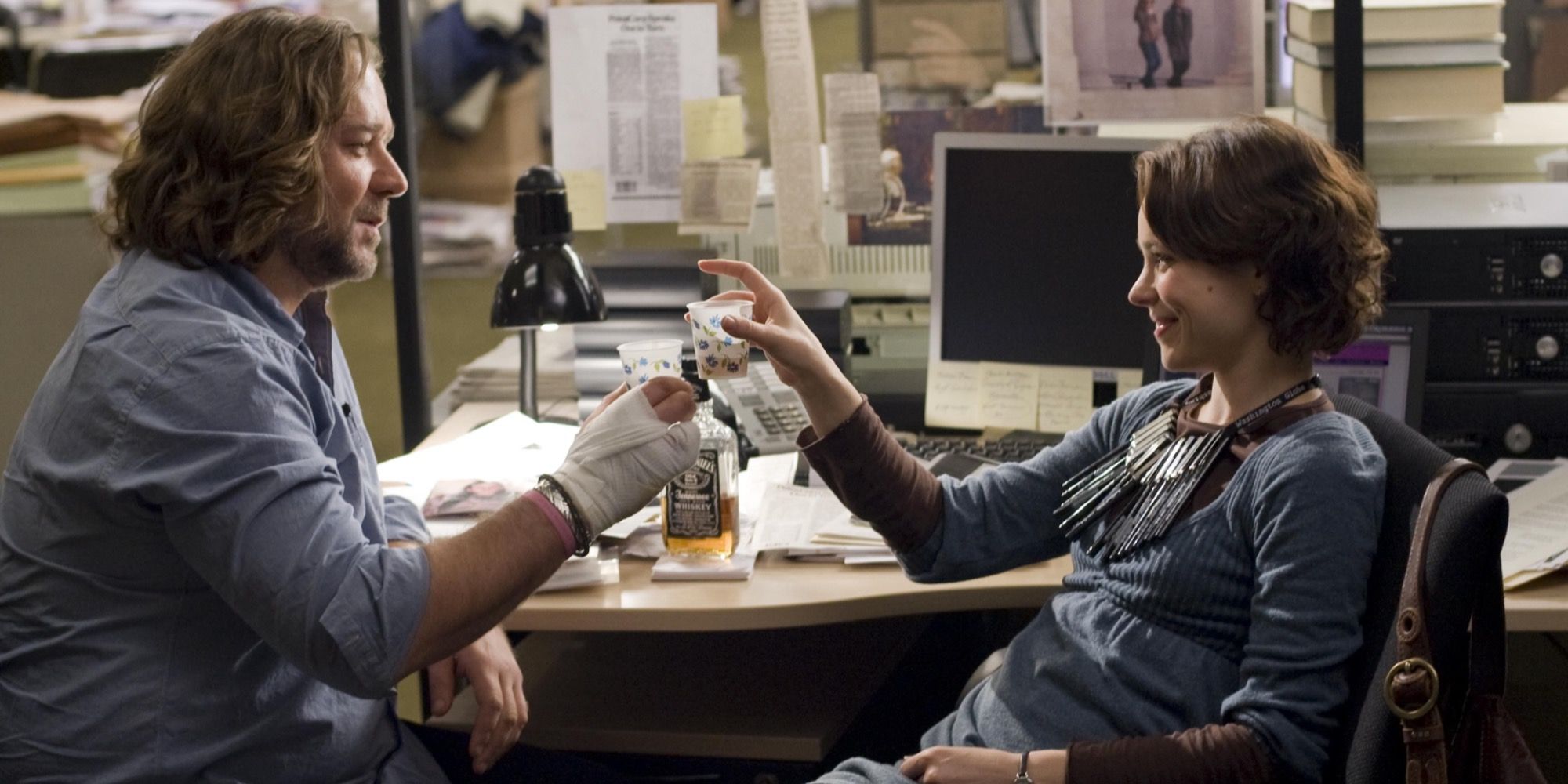 Russell Crowe and Rachel McAdams star (with adorably-charming chemistry) as two reporters (Cal and Dell) tasked with writing an exposé when a young government staffer ends up dead. The problem is that she and the congressman (Ben Affleck) she worked for were schtupping. He also happens to be Cal’s old buddy from college.

There is much more to this American adaption of a British TV serial than this summary, but know that each time you’re confident you’ve got it right, you do not. Most notably, Helen Mirren, Robin Wright, Jeff Danielsand Jason Bateman also star, and it was directed by the one and only Kevin Macdonald (The Mauritanian; The Last King of Scotland).

In Worth, Michael Keaton plays Kenneth Feinberg, a law professor called to Washington in the immediate aftermath of 9/11. The government concern is litigation against the airline industry, fearing it will paralyze the economy. So, a victim fund is created in exchange for their families’ promise not to sue: “Government-sponsored charity … with strings attached.” Ken is tasked with calculating how much each victim life is worth – from CEOs to custodians – and the numbers differ vastly. It’s pretty gross stuff, and Ken knows it.

RELATED: Michael Keaton to Direct and Star in Noir Thriller ‘Knox Goes Away’

It’s a film rife with goose-bumpy dramatic irony and archived media clips – many of which will be recognizable to the masses. It’s also a stark reminder that though the government is “for the people, by the people,” it is often the opposite.

Barry stars Devon Terrell as Barack Obama when he was a chain-smoking, less politically inclined youth just called Barry. Set during his time at Columbia University in 1981, Barry is less overtly about politics than it is about the future president’s struggles with identity; nonetheless, everything in his life is already political due to the color of his skin and his difficulty navigating the two worlds he is straddling, at one point even sadly stating, “I fit in nowhere.”

Directed by Vikram Gandhi and starring Ashley Judd as Barry’s mom, Stanley Ann Dunham, The film is a modest and understated portrait of a young college kid just trying to get his bearings and figure out who he is. Though only one man knows how truthful the story is, the film remains a fascinating glimpse into his humble beginnings. Do not expect to see a young Michelle, however, as Anya Taylor-Joy (The Queen’s Gambit) plays the love interest. 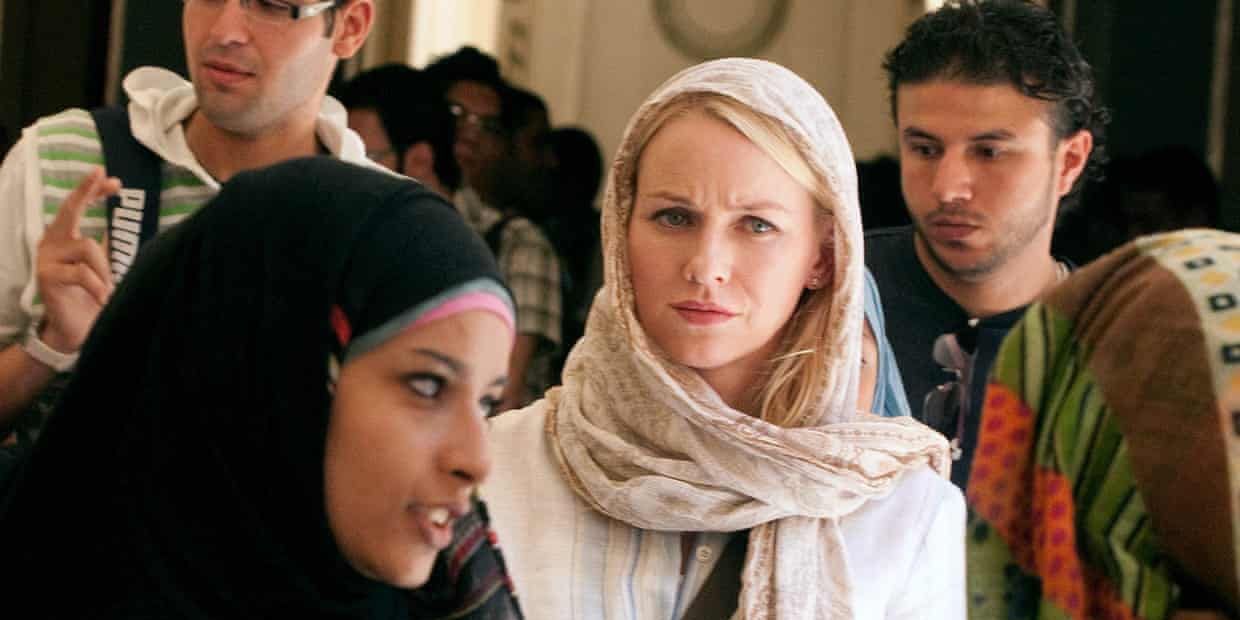 Directed by Doug Liman (The Bourne Identity; Mr. and Mrs. Smith), the film stars Naomi Watts and Sean Penn as a married couple with complicated occupations: she is an elusive CIA agent, while he is a former US Ambassador. Individually dealing with the weight of government misinformation to justify invading Iraq after 9/11, each knows the truth – and that the reasons “stove piped” to the American people are utter “bullshit.” Unfortunately for their relationship, one has more (questionable) integrity than the other.

A highly-stylized (and reasonably accurate) account of former President Bush‘s invasion of Iraq and the consequences after that, Fair Gameencapsulates everything that is dangerous about playing politics. While it is recommended you see the film, know you should also be prepared for the indignance from the levels of manipulation portrayed.

Speaking of the war in Iraq, enter Vice. Starring Christian Bale as Vice President Dick Cheney and Amy Adams as his wife, Lynnedirector Adam McKay (Don’t Look Up; The Big Short) gives Cheney the unflattering portrayal many feel he deserves – a punishment of sorts for his unfettered dealings in war and foreign relations.

Expectedly, McKay takes liberties in accuracy (who really knows Bush and Cheney’s private conversations?), But what transpires, no doubt, has nuggets that were not-yet-contemplated by the general public. Overall, the film paints a frightening portrait of American bipartisanship, nationalism, and belief systems. Thankfully, Sam Rockwell as George W. provides some well-needed comic relief – as painfully ironic as his performance is.

KEEP READING: Best Shows like ‘The First Lady’ to Watch Next for More Exciting Political Dramas