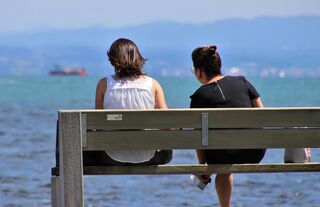 Parent-adult child estrangement has come out of the cultural cupboard where secrets are kept with both new psychological research and renewed hand-wringing about what some are calling an “epidemic” or a “dangerous trend.” I’ve been writing about estrangement for over a decade, and not as a disinterested observer since I was estranged from my sole surviving parent more than a decade before her death over 20 years ago. I am also the mother of a 34-year-old adult daughter, so, once again, I am an interested party.

The shifting definition of adulthood (and parental relationships)

In a 2017 study, Karen Fingerman notes that the amount of communication and involvement between parents and adult children has shifted significantly since the last century, along with the definition of “adulthood” undergoing its own shift as young adults take longer to reach what once were considered markers of adulthood, such as completing education, marriage, moving out of the familial home, and embarking on a career path. The generation she focuses on is the one called “Millennials,” commonly defined as those born between 1981 and 1996. It’s worth noting that Fingerman’s inquiry is focused on parental well-being and whether parents benefit from continued involvement in their adult children’s lives. It will not surprise you that her findings come down to “it depends.” One thing that’s worth noting is that Fingerman, who dismisses the notion of “helicopter parents,” does not seem to register that increased dependence on parents and decreased self-sufficiency and independence of adult children might have deleterious effects on all parties as well as the relationship between them.

6 common sources of tension between parents and adult children

The words that float to the top of my mind are the wise ones written by marital expert John Gottman: It’s not whether you disagree or fight but how you disagree or fight. That’s true of all relationships, including that of the adult child and parent. Parties with mutual respect who have no investment in winning the point or being “right” and have reasonably developed emotional regulation are more likely to resolve their differences amicably, if sometimes imperfectly. Sometimes, though, there are unspoken assumptions that can cause tension and, sometimes, escalate into real estrangement.

While political disagreement is often cited in research, I will not address that since it sounds a lot like “the generation gap” that papered over more important ruptures between Boomers and their parents.

These observations are drawn from interviews with readers for my books, including my forthcoming one on verbal abuse.

1. The assumption of a quid pro quo

Alas, some parents believe that, by virtue of their involvement in their adult child’s life, they are guaranteed some kind of payback. That was the source of tension in Melanie’s life:

“I was enormously grateful that my mother was willing to babysit my son two days a week because it basically cut my childcare expenses by 40 percent. But, somehow, she felt that doing this for me gave her permission to start commenting on how I was raising him, how I managed my finances, you name it. I tried talking to her about it calmly but she became incredibly defensive and then called me an ingrate and insisted she was only trying to be helpful. After much discussion, we decided to put the baby in daycare full-time so as to avoid a family disaster.”

If you know for sure that your parent is a believer in the old axiom, “There’s no free lunch,” it’d be wise to look for the strings attached to the offer. If you are a parent offering your services and you believe that there should be a quid pro quid, make that clear. Otherwise, whatever it is that you’re giving—whether it’s your time, money, support, or advice—should be delivered without encumbrances.

This is an area that comes up with adult children frequently, and it’s the lucky parent or parents who think the world of the person their child has chosen to be with. Dave and Lydia have two daughters; he’s an attorney, and she’s a Ph.D., and they both believe that degrees are necessary for a life well-lived. While their older daughter is a lawyer married to a doctor, their younger daughter—a doctor—has been living with a man who didn’t finish college and who basically functions as his wife’s “househusband.” This is apparently a great fit for Jennifer, the daughter, who has had the support of a guy through medical school and residency and comes home to fabulous meals, a clean house, and all the errands run on a daily basis, but it drives Dave and Lydia crazy. Jennifer has dealt with their disapproval by moving to another city and showing up mainly for family gatherings but cutting back on one-on-one visits to maintain all of her relationships.

But not every adult child will be that lucky. It should be said that sometimes there are very good reasons for a parent to voice concerns about a partner or spouse—abusive behavior, for example, or addiction come immediately to mind—but the reality is that sometimes a parent’s objections will have more to do with his or her own rigidity about “the best way to live life,” what they consider important to a successful marriage, or some kind of prejudice.

Parents who are high in control or who see their children as reflections of themselves—and as markers of their success in the world—often find it difficult or even impossible to accept their adult children’s decisions. Most of the time, we’re not talking about deciding to live off the grid or join a cult but decisions which deviate in significant ways from the choices the parents made for themselves. That was true for Delia, age 38, who decided to take a hiatus from the practice of law and homeschool her daughter and son, now ages 7 and 10:

“Oddly enough, this was really a by-product of the pandemic and not something I’d ever considered. It was impossible not to notice how my daughter, who’s both and shy, picked up academic skills way faster without the stress of the anxious in-school day. Ditto my son who did better without the distraction of the other kids acting up. And then school re-opened and they both lost that motivation. This isn’t a forever thing but, boy, my parents’ reaction was so telling. They are furious at me for becoming what they call ‘a powerless housewife,’ instead of a high-powered lawyer. They have excoriated my husband for supporting me. It is as though I had killed off their dreams or committed a crime. My relationship with both of them is rocky at the moment and I honestly wonder whether their love for me depended on my making partner in my law firm.”

4. Criticism of the adult child’s child-rearing

This is a very real tinderbox issue, and the only thing that comes to mind is the commercial from my childhood in which Smokey the Bear, wearing his Park Ranger’s hat, intoned, “Only you can prevent forest fires.” This particular area is torture for the “my way or the highway parent,” but the generally flexible parent can also fall into the same trap. Unless you are witnessing neglect, if you haven’t been asked for an opinion, the high road is not to offer one. Sometimes, wisdom involves reaching for duct tape to be placed over the mouth.

5. Freighted comparisons to siblings, relatives, or others

Lots of streams feed this particular river. Sometimes, it’s an old pattern from childhood, and the parents wrongly assume that one way of motivating a child is to compare him or her to a sibling. (Nope, it is a bad idea.) Other times, it’s a reflection of favoritism that stings in childhood and beyond. Whatever the source, parents should be aware that this is an off-ramp to conflict. Do not compare your adult child to anyone, related or not; that goes for his or her actions, choices, and everything else.

These examples are very different from commenting that your adult child’s problem was faced by a sibling, a relative, or someone else and suggesting that perhaps he or she might seek their counsel. Hear the difference.

If you want a shortcut to estrangement, this is it. Regardless of what the culture says, respect for parents is earned by parents in the day-to-day and not conveyed by some magic wand. Shutting an adult child down on the basis of respect “owed” may work in the short term but not in the long run.

Thanks to my readers, as always.