From birds to elephants, rituals are found everywhere in nature. Yet no animal is as ritualized as Homo sapiens. All human cultures have a plethora of ceremonial practices that serve many of the same functions for us as they do for other critters. It is no coincidence, then, that many animal rituals are strikingly similar to those found among humans.

Social animals often use rituals to say hello. Like humans, various apes and monkeys kiss, hug, hold hands, or caress each other. Some of those greeting rituals are culturally transmitted. Chimpanzee communities perform a “hand-clasp,” like a secret handshake that is unique to each group.

Other primates get more creative. Male baboons have a greeting ritual called the “scrotum grasp.” The term is self-explanatory. By allowing their peers to handle their sensitive parts, those baboons signal trust. But as it turns out, genital greetings are not unique to baboons.

The anthropologist Mervyn Meggitt documented a similar custom among the Walbiri, an aboriginal tribe in Australia, who use a penis-holding ritual to ease tensions. After a quarrel, a man may visit his adversary and present his penis to him. The host holds it in his hand, signaling his willingness to put his grievances aside. Sometimes, however, the dispute can be so serious that the aggrieved person may refuse to hold the visitor’s penis. Such refusal is perceived as a grave insult, which can lead to bloodshed.

Every year, groups of flamingos congregate in shallow lakes around the world to perform a spectacular mating ritual. Known as a lek, this type of gathering can involve over a million birds.

Once the colorful crowd assembles, they break off into smaller groups that begin to move in circles, holding their heads high and turning them from side to side. After a few turns, they switch partners and repeat the same dance. Watching this graceful courtship dance, one might not help humming the tune of a Viennese Waltz.

Ornithologists who studied these rituals found that the most skilled dancers (those with the largest repertoire and the most varied combinations of moves) were more likely to pair off after their performance. Among humans, too, dancing is one of the most common forms of courtship. And just like flamingos, research shows that good dancers are perceived as more attractive.

In 1948, psychologist BF Skinner published an article with the title “Superstition in the Pigeon.” It reported the results of a bizarre experiment. Skinner placed pigeons inside a chamber designed to release food pellets at random intervals, and observed their behavior. Faced with uncertainty, the birds began to develop rituals: they turned, twisted, swung, and thrusted their heads, engaging in choreographed action patterns in an attempt to influence the outcome.

Humans also turn to rituals to cope with uncertainty. Laboratory studies show that both children and adults become more ritualized when faced with stressful situations. Their movements become more stereotypical, repetitive, and patterned, which provides a sense of order and control.

Do these rituals work? In a field study conducted in Mauritius, my colleagues and I found that Hindus repetitively had higher heart rate variability after practicing rituals in the local temple, suggesting that they were better able to cope with stress.

Elephants are one of the few animals who seem to have an understanding of death. They seem to mourn their dead, and even try to bury them by covering them with dirt, leaves, and flowers. They may remain with the corpse for days, taking turns to inspect and caress the body, and alternating between sitting in silence and trumpeting in unison.

These behaviors bear resemblance to the funerary practices found across human cultures, which often include holding wakes, contemplating, and wailing. In many cases, elephants frequently return to the carcass, as if visiting a grave or holding memorial services.

In 2016, a group of researchers at the Max Planck Institute for Evolutionary Anthropology came upon a striking observation. Chimpanzees in a variety of locations in West Africa regularly visit specific trees that seem to have special significance for them. Upon reaching them, they stand upright and start jumping around, screaming, and drumming on their hollow trunks in a state of exaltation. 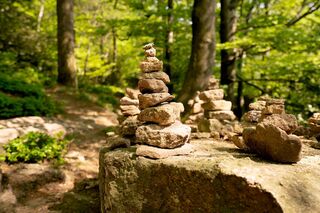 Perhaps what is most interesting about these visits is that the chimps collect and carry rocks, which they stack at the base of the trees, as if trying to mark their location. Researchers have likened those stone piles to the cairns that people in so many cultures use to mark sacred locations.

Observing the sophisticated nature of some animal rituals, some biologists wondered whether they could reflect some elemental form of spirituality. “If the chimpanzees had a spoken language,” wrote the primatologist Jane Goodall, “if they could discuss [their] feelings among themselves, might not they lead to an animistic, pagan worship of the elements?”